I got a rematch against Swordmaster on UB. This was my 2nd game of KoW and I changed my list up a bit in the hope it would perform better. Unfortunately the general commanding it did not improve as much as the list did J

This was how deployment ended up.

I think this was not a good set up for me – Swordmaster surprised me a bit by deploying his Drakon’s and the Lord on the right. This muddled up my thinking as he normally keeps a compact deployment line and doesn’t leave units isolated. As a result I left a big gap in the middle which ultimately leads to my downfall. 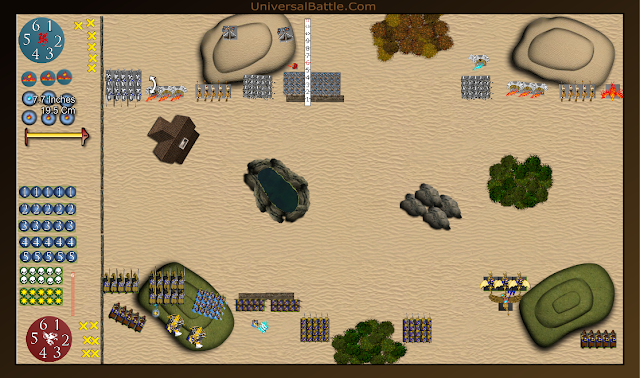 Elves
Elves won roll off and choose to go first. They advanced cautiously and then opened up with their normally efficient shooting. As a result the left lancers were wavered. Paladin Knights and Phoenix suffered some damage but shrugged it off. 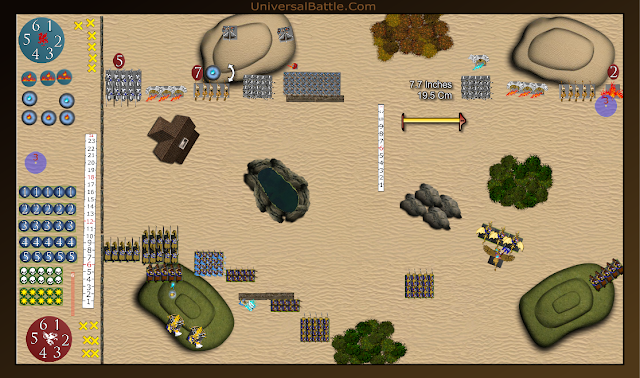 Basileans
And now comes my 2nd mistake which basically ended the game. I advanced with the Elohi and Phoenix on the right and left a nice big gap for the elf flyers to move into – doh!!! Phoenix regened all it wounds and my shooting did absolutely nothing. I moved the Knights up and positioned the 2nd Elohi unit behind so I could fly over next turn – however Swordie didn’t fall for that and they became stuck. 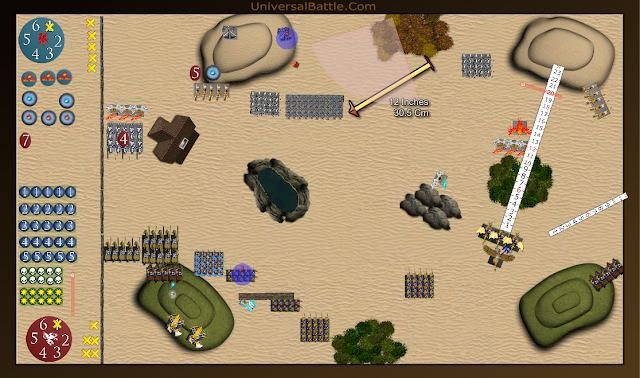 Elves
Drakons moved up into the space I conveniently left for them – doh again. Smaller Stormwind cav unit charged the Knights but Sowrdie didn’t leave me room for the Elohi to fly over. Shooting routed the left Lancers and di some wounds to the BT and Crossbowman. Knights took significant damage but miraculously did not waver or route due to inspiring from the Elohi. The Basileans were in a bad spot. 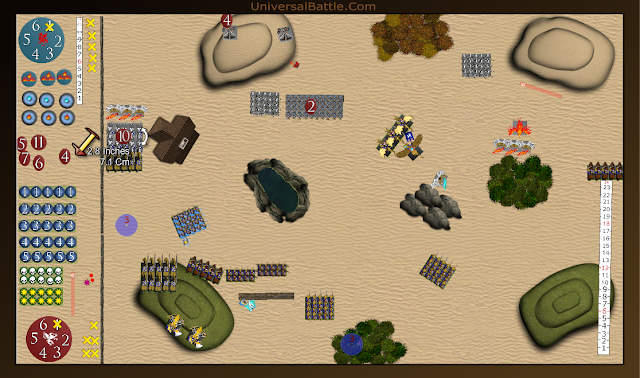 Basileans
I positioned Elohi, Phoenix and Paladin Guard to hopefully be in position to deal some damage in later turns, sent the Ur-Elohi on a war machine hunt. Shooting routed the left Seabreeze Cav and a unit of archers. The Knights countercharged the Stormwind Cav and routed them. In the end it was my only successful turn but I was badly positioned for the impending elven onslaught 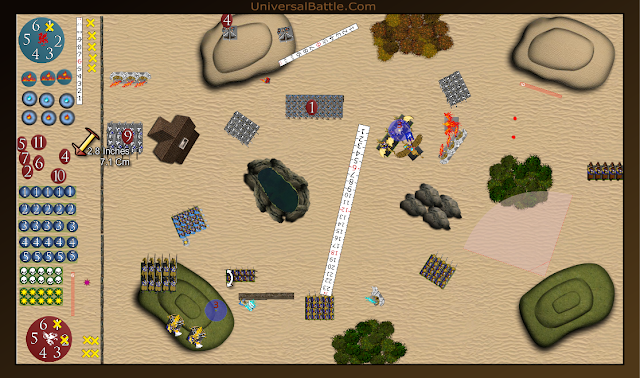 Elves
Seeing the trap evolving behind his Drakons, Swordie choose to charge the BT to get them out of the way and primed for a nice rear charge on the crossbowmen. Palace Guard charged the Knights and routed them. Shooting wavered the BT. 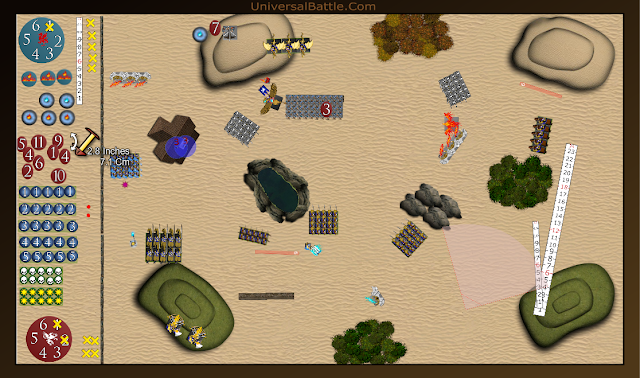 Basileans
The beginning of the end for the Basileans – Elohi charged the Palace Guard but failed to rout them. I reformed the Crossbowman but forgot to check the distance from the spear unit – doh – again. Ur-Elohi positioned for a charge of the war- machine. I failed the move the Paladin Foot Guard out of charge distance from the Drakons – doh!!!! (recurring theme here) 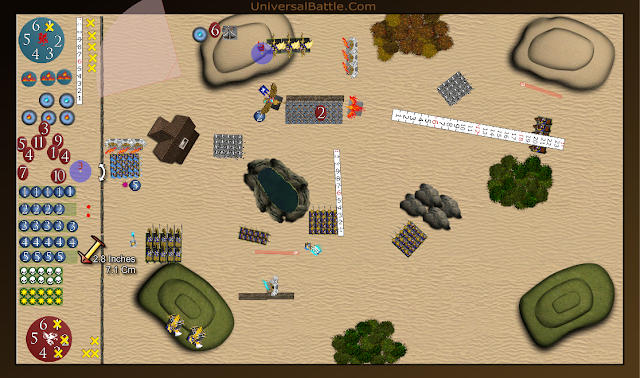 Elves
Drakons rear charged the Paladin Foot Guard with Stormwind to the front and routed them. Spears into rear of Crossbowman and surprisingly they were routed as well L. Drakon Lord charged BT. 2nd Elohi somehow survived. 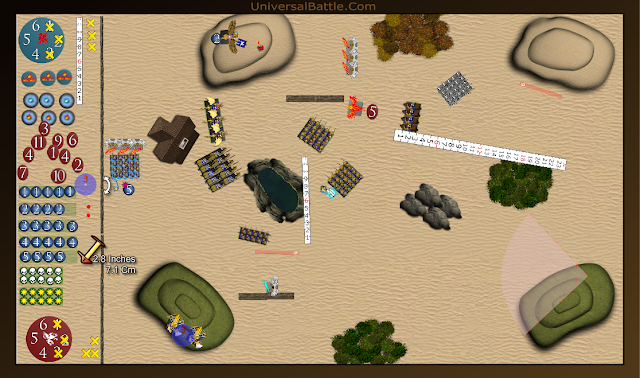 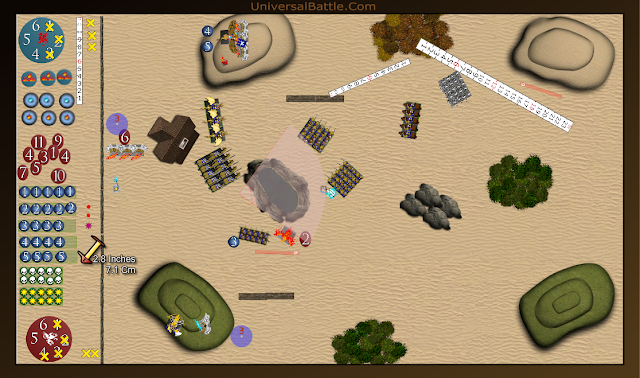 Elves
Just a matter of the elves cleaning up now. Stormwind routed the Elohi and shooting finished off the 2nd Elohi unit. All I had left was the Ur-Elohi, Mage, Phoenix and Paladin Foot unit. 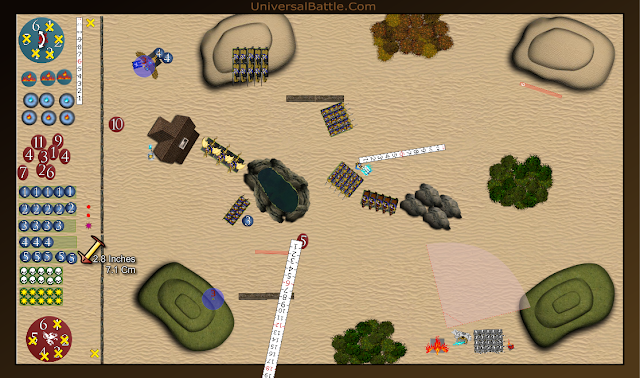 Due to the time we decided to call it as there was not much chance of the Elves inflicting much more damage and I was going to run away. In the end a 1680 – 730 victory to the elves.

Conclusion
I have to admit I was rather deflated after the game, I was not grasping the movement phase and was again totally out manouvered and out played yet again. Once again I let the elves get behind my lines and that was the end of the game.

In hindsight I should have;

1.     Deployed the 2nd Elohi unit on the right beside the crossbowman and then just held back turn 1 – this would have left the Drakons stranded with no where really to go apart from moving back to the left.

2.     I should not have moved the crossbowman T1 – I should have just left them there and waited for the advance. Combined with point 1 this would have allowed me to weaken his units as they advanced. In T2 when they did shoot they easily routed an archer unit. A few more rounds of shooting with the BT’s would also have also weakened his units as the only turn they hit once (T2) they routed the Stormwind cav troop.

3.     I should have delayed advancing the Paladin Knights and made the elves come through the gap between the building and the board edge if they wanted to get to me. That combined with holding back the left Elohi would have slowed the elven advance and let my shooting do some damage.

4.     I probably should have sent the Phoenix to hunt the war machines and left the Ur-Elohi in the center to menance his characters and smaller spear units. Both units are survivable and would have been better is used differently.

Whilst I played badly and was a bit downcast over the game, and KoW generally to be honest, I think the list has merit and maybe need to play some other armies to see how it performs before I make too many changes. It has a combined arms approach with some hard hitting units so I will persevere with it and see how it goes.
As to each unit here is my analysis.
Ur-Elohi – a good character I believe – combined with Elohi they should be enough to deal with most units in the game.
Priest – does its job – needs to be around to bane chant and heal the crossbows – a 2nd priest would be good but finding points is the problem.
Phoenix – surprising resilient for a D3 monster – breath attack(10) and heal(6) should enable it to do variety of things – hunt warmachine, single characters and small units. I think I will persever – plus I just arranged to pick up a Kingdom Death Phoenix as a model which should be a good centre piece for the army, so it stays for that alone J.
Crossbow Horde – mixed feelings about this unit, 5+ to hit (4+ with Brew of Keen-eyeness) but only 20 attacks limited their effectivness in my opinion. They will be a wait and see option.
Paladin Foot Guard Regiment – good attack and defense, used correctly they should be a good unit.
Paladin Knights – a good hammer unit, a horde might be a good option but would be a points sink.
Elohi Regiment – I like this unit, can’t be wavered, are inspiring, a few more attachs would be good but you can’t have everything
Panther Lances – would be so much better if they could shoot, with low defense (D3) I am not sure they do the role of a diverter so well as they seem to die easily. Another wait and see unit.
Heavy Arbalest – when they hit they do D3+2 damage at Piercing 3 so they can hit hard. However 1 attack hit on 5+ mean they don’t hit often. At 65 points they give a cheap shooting option that doesn’t exist elsewher in the army - so again a wait and see unit.