Below is a brief summary of my games and post games analysis.

I have played Fued a number of times using a variety of his armies and we stand at 1 win a piece. This was the only Trident Realm army at Cancon and had quite a few distinctive models. His list was as follows:

Fued deployed his army his left edge to centre. Whereas I spread my army across the board a bit. My theory was to hold the right edge with the Paladin Knights, sweep across from the left edge with the Elohi with the Phoenix and Ur-Elohi providing them support. However given it was the first game of the tournament we were both very cautious. Fued flew his Centuran straight at my Crossbows - obviously thinking they were actually good at shooting - haha - little did he know. However the crossbows and paladin foot guard regiment managed to take him out as well as surviving an attack from the phantoms. Both units were unable to repeat the victory against the phantoms who flew away after surviving a combined charged.

I managed to get my Elohi behind his lines but in one of many moments of madness throughout the tournament in turn 5 I placed one of the Ur-Elohi directly in front of his naiad horde thinking they were facing my spear horde - forgetting they had been turning face repeatedly as I maneuvered behind him. The move was so the Ur-Elohi could heal the Elohi with the Phoenix. Result being the Ur-Elohi got rear charged by the naiad horde. Turns out even an angelic Ur-Elohi won't survive 75 attacks - who knew!!!!

I had been playing the game quite well I thought until that point. That madness cost me the game as if that 180 points had not been lost I would have gotten the win. I only lost a unit of Paladin Foot and an Arbalest. I killed the Gigas, his Centurian and both tidal swarms.

The Phoenix and Ur-Elohi had been doing what they were supposed to do - all the wounds suffered by the Elohi kept getting healed.

Learning:
* Double/triple check your movement (not that I actually learnt this)
* Elohi/Ur-Elohi/Phoenix combo is quite good

Result was a draw - cautious start but it was Game 1. 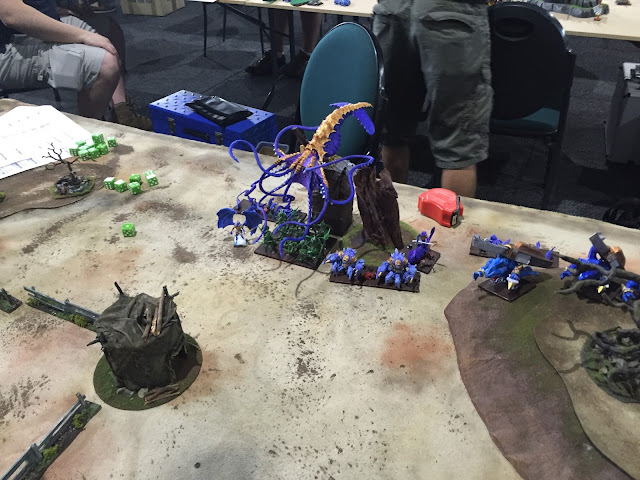 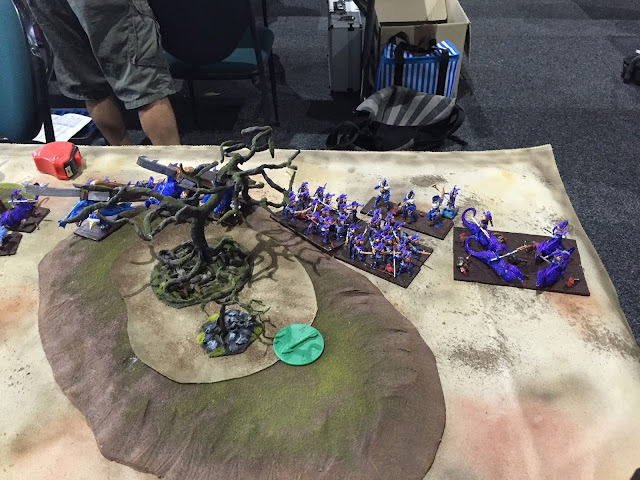 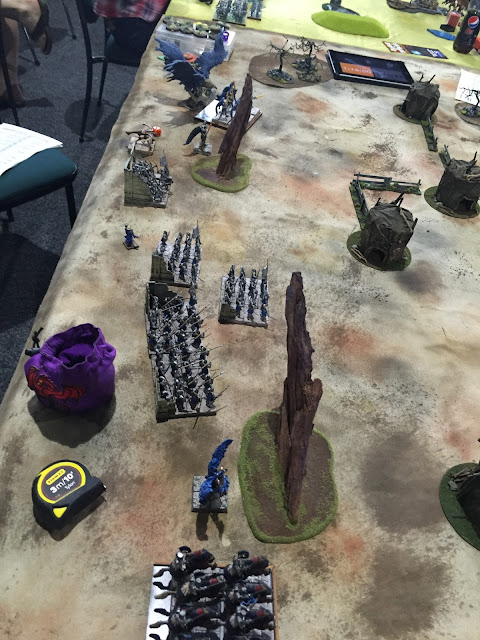 David was new to KoW and admitted he was rather inexperienced. He was a terrific bloke and we had a nice friendly game.

David deployed his units from his right to left General, Beast, Knights, Pikeman were in the middle then spears, bowman with Seige Artillery in left corner. Wizards supported the spears and Bowman.

I deployed my Elohi, Knights and both Ur-Elohi opposite his General, War Beast and Knight horde, supported by the phoenix. My Spearman and Paladin Foot Guard faced off against his spears. Crossbowman and arbalests were deployed on a hill behind my spears.

David got 1st turn and was very cautious indeed - nothing much moved. On my turn I advanced my left flank straight up the board to threaten his general and knights. Rest of my line advanced slightly apart from a paladin foot unit who used the cover of a forest to advance against his bowman. David was rather concerned about my Elohi and Knights and spent the first 4 turns moving backward and sideways to avoid me. This suited me fine as the invade scenario meant that I was in the box seat and didn't need to press. My paladin foot guard finally got into position to charge his bowman but the corssbowman got them first - there only shooting kill for the tournament. About T5 David remembered the scenario but by that time I had removed one beast and gotten my Knights, Elohi and Er-Elohi behind him to threaten his heavy pike block - the one unit in his army I was very afraid of and his knights - and he had nothing on my side of the board and not much of a chance to get much across the board. He flew the general over to my side but had to turn the knights to faced my Ur-Elohi and pike block to face my Elohi and Knights. He used his wizard to delay my knights but was in a bad way. His 2nd beast charged a paladin foot unit and routed them but the spears were not in range of my spears so he had to sit right in front of them just on my side of the board. My last turn I charged and routed the spears - charged the pike block with the Elohi and Knights and charged both Ur-Elohi into his knights but failed to break them.

I lost a paladin foot guard unit. David lost his bowman, spears, all his militia, a wizard and a beast.

I won the scenario as David only had his general and a beast in my zone and I had lots in his.

My first win with Basilean's - my tournament goal had been satisfied so I was a happy chappy.

Learning:
* Keep an eye on the scenario
* Once again the Elohi/Ur-Elohi/Phoenix combo is quite good and opponents are rather scared of it.

This was a very strange game - I was rather concerned about the 4 elemental hordes with the surging Druids and really had no idea what to do. I thought the best option would be to deploy all together and then try to move the flying units to outflank his army. My shooting was inept at best so I wasn't confident of removing stuff from range. Dru had deployed from the centre outwards to the right edge with the tactic of circling around my army and moving towards the centre late game to claim the win - all those hordes were going to make it difficult to get my units within 12 inches of the centre,

I was extremely cautious - my knights had outflanked his army on my left but were facing a horde of elementals who were sitting in a forest holding them at bay. I decided to move my flyers to Dru's left flank but Dru was rather cautious and didn't advance as quickly as I thought. However eventually I was stuck in no-mans land and had to try something. I charged the left most earth Elemental horde that were sitting in a forest hoping I could break it on the charge and turn to face his army - the Ur-Elohi  and phoenix were positioned for support but I wasn't that confident of getting anything out of the game at this stage. It was a high risk strategy but I had no other real option. The Elohi failed to break the earth horde (not all that surprising given they were sitting in a forest).

Dru countercharged and also flank charged with a his water elemental horde - wasn't looking good for the Elohi but Dru's dice failed him and the Elohi survived. The Elohi countercharged and an Ur-Elohi flanked charged and the phoenix and other Ur-Elohi healed up the Elohi - the earth elemental horde got broken and the Elohi turned to face the flanking water elemental horde. At this point the situation was still dire for the Elohi - they had been healed back to a low number of wounds but they coped the water elementals and the fire elemental horde to the front and the Ur-Elohi was charged by one of the greater fire elementals. The spears and paladin foot had moved up to be in charge range of the hordes and elementals that were clustered around the Elohi, the knights were keeping the last horde from joining the party but both units were pillow fighting each other. I think Dru was confident the Elohi were going down this turn and would be able to turn and face the rest of my army. This was a pretty good thing to be confident of but alas Dru's dice failed him again - 18 x CS1 and 18 x CS2 attacks on the Elohi produced 3 wounds and the Elohi survived.  I went all in with the Paladin Foot into the rear of one of his hordes and the Ur-Elohi and Elohi into the front and routed it - the spears went into one of the  Greater Elementals but failed to break it. The 2nd Ur-Elohi charged a druid and routed it.

Most of this time one of his greater elementals was charging and countercharging my xbows but couldn't rout them. Dru completely forgot his Pegasus and that probably cost him a draw in the end. He could have flown it within 12 inches of the centre to get the draw. I think he got over confident and didn't think it was necessary to risk the Pegasus getting shoot at by the arbalests but I think he had a right to be over confident. I had albeit conceded the game by T3 and took a huge risk to try and salvage something but Dru's dice failed him and I was able to prevail as I was up in points under the scenario.

The Elohi had survived 90 C1/CS2 attacks and ended with 8 wounds - a truly allstar performance - albeit I think the Blessing of the Gods artifact truly worked for them this game - they shouldn't have survived by somehow they did.

Dru lost 2 elemental hordes and a Druid - I lost nothing

Learning:
* Never give up - dice are fickle by nature and sometimes they work for you and sometimes they work against you.
* Once again the Elohi/Ur-Elohi/Phoenix combo is quite good and saved the day.
* Knights charging into a forest, even with the BoS, are not that good.
* Keep an eye on all your units - they may be important to the final result.