Game 1 was against Daniel Bird and his elve’s. Daniel is an awesome painter and his army was very well painted as shown by his 2nd in the painting prize.

His army was as follows:

So it was 9 drops against my 17 - 2 big D6 monsters, the obligatory Drakon Horde, heavy cavalry regiment, shooting support and the Green Lady.

The main issues for me were the D6 monsters and the Green Lady – at D6 and big support spells she was going to be problematic. My aim was to stay away from the shooting, delay the cavalry and Drakons units as best I could and deal with the monsters so I could get charges on my terms and let my over whelming numbers grind him out.

The game was pillage which also was in my favour – 5 pillage tokens against an army with 9 drops was always in my favour. Another factor in my favour was that Daniel was inexperienced at playing KoW having only played 3 games prior to the tournament and I have found that experience can be a hard issue to compensate for.
1. You don’t know your own army all that well, and;
2. You rarely know how the opposition’s army will perform.

With 9 drops against 17 I was always going to have a deployment advantage. I decided to spread the pillage tokens as wide as I could – unfortunately Daniel placed 3 and I placed 2. Daniel kept his together to create a combat zone around the forests. Daniel deployed completely on his left – I deployed mainly on my left – my thinking I could sweep around his army and get some flank charges. 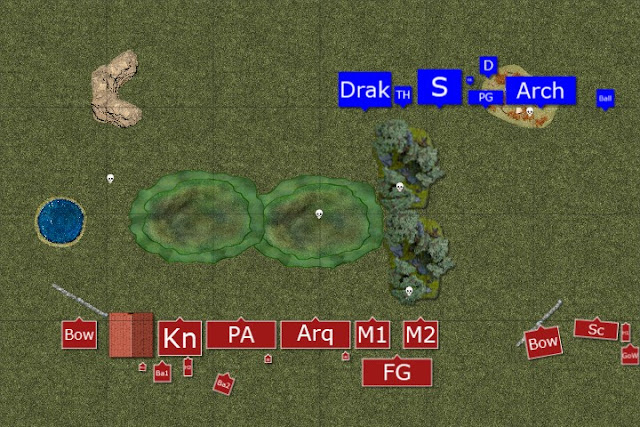 This game was ultimately decided on Daniel’s inexperience, despite having only 9 units  he was a bit indecisive with his movements and actually timed out at the end of turn 5.

Daniel got 1st turn and vanguarded his Tree Herder up to be near the token in the forest but was hesitant with the majority of his units, he moved the Drakons to the left behind his army and just pushed up the Stormwind and Dragon slightly. This meant hardly any of my units were immediatley threatened and I could start to encircle his army. Hisshooting was out of range. His silverbreeze were on the right (not on map) and he moved them up to shoot my bowman but remained in LoS on the ballista.

I charged the dragon with the Scouts hoping to disorder them and hold them up – they failed. The General and Hero moved up on the right to threaten the war machine and archers. On my left my combat units moved up to threaten his flanks. Shooting removed the Silverbreeze and that left the token on that side of the board open. I did some wounds to the Tree Herder but in what was to be a recurring theme in Daniel’s turn he removed most of the wounds. 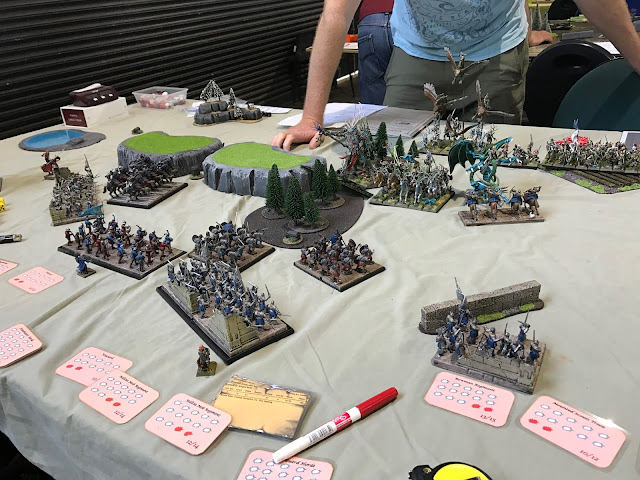 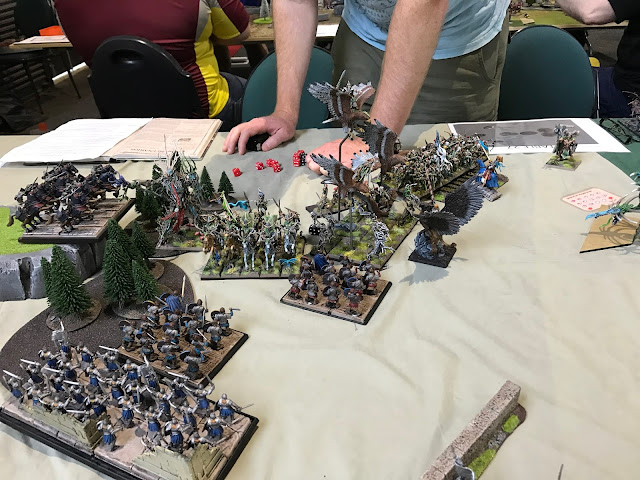 Turn 2 onwards Daniel continued to be too cautious and didn’t do any significant charges. My turn 2 I got a flank charge on the Tree Herder with the Knights and thought I had it – but failed to get Bane Chant off but still did 10 wounds but it survived. I spent the remainder of the game attacking the Tree Herder with the Knights and the Polearms and it survived. My General and militia continued to hold up the Dragon and Stormwind whilst the hero went on operation “stop his shooting” for a few turns. The Green Lady was annoying but my Militia and General managed to take out the Drakons – I did get lucky there but got a rear charging Dragon into my General for my trouble. By T4 Daniel managed a combo charge with the Stormwind and Dragon on the Foot Guard but failed to break them. Foot Guard took out the Drakons but eventually fell to the Dragon before Daniel timed out. I proceeded to the take out the Dragon, ballista and Palace Guard whilst securing the pillage tokens.

17-3 win to me after attrition - Daniel lost the Dragon, Drakons, Stormwind, Palace Guard, Silverbreeze and Ballista whilst I lost The Foot Guard, both units of Militia, both Hero’s, Scouts and the General.

So good start to the tournament.
Posted by DarthSabre at 03:04