Briscon was a multi event gaming convention held in Brisbane on 29th-30th of April. I decided to take a holiday and me and the wife headed to Brisbane stopping along the way to do some sightseeing.

I have been playing KoM for around 12 months and chopping and changing my list to try and get something that worked. KoM are not a forgiving army but they are enjoyable to play. First time I had taken Basilean allies but I thought they filled a void that the army just didn’t have – a significant flying threat.

Quite a small army in terms of units but flying monsters are always a pain to deal with and having 2 makes it even harder, especially when the scenarios means you have to deal with them.

Dan deployed all his units on his left except Ba’su’su and the High Priestess went on the extreme right. I deployed Footguard and Ur-elohi to counter his right and the rest went in the middle. 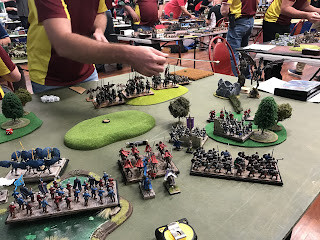 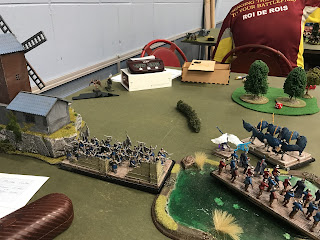 I felt the FG and Elohi were safe so it was going to come down to how successful I was at getting the tokens from the Dragons and Pathfinder Knights.  On the left Ba’su’su and the priestess danced around the Footguard and Ur-Elohi for 5 turns and really didn’t get involved to any big way till T6. The Dragons flew up the right flank but didn’t go into my units in a co-ordinated way which allowed the Beserkers to do what Beserkers do and take out one of the Dragons early and the Pathfinder Knights mid game to be sitting with 3 tokens. Turn 5 the 2nd Dragon came back and charged the Berserker together with the crossbowmen – as they were in the forest the charged were hindered and did little damage. The Beserkers failed to remove the Dragon (low nerve roll) and just survived the return attacks on turn 6 but wouldn’t survive turn 7.

The Elohi had taken some wounds earlier in taking out one of the Knight Hordes and then T6 the priestess managed to get some LB attacks through and they failed their re-rollable test and died. The Footguard were never seriously challenged so after turn 6 I was up 4-1 with one token uncontested but three tokens would be Dan’s if we went to T7 – we didn’t and I managed a win.

The were 5 tokens for scour. Adam deployed exclusively on his left apart from the Drakon Lord and the Beserker Lord. I spread out evenly across the board. 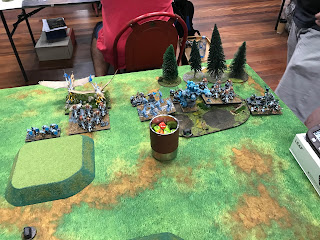 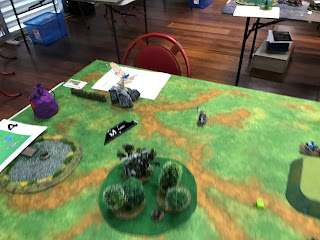 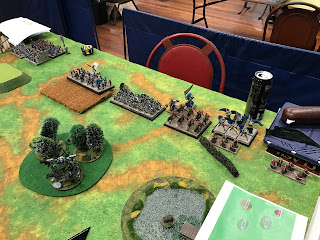 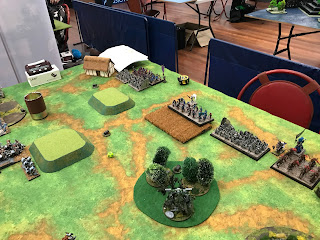 My strength was on my left, where there were 2 tokens and Adam’s was on the right where he held one token immediately and there was one right in front on my Militia/Beserker units. My plan was the ignore the token he held – scour the token in front of my Militia – control the tokens on my left where Adam had nothing and contest the centre token. To win Adam would need to move diagonally across the board whilst getting shoot by the Arquebusiers and in charge range of the Beserkers.

This was how it played out and it was a very cagey game with not a lot being killed but it came down to the Flame Belchers doing enough damage in the centre for Adam to control the middle token which I had hoped to contest at a minimum so it ended 2-2 and a draw and attrition was around 600 each.

This was always a game in my favour – 7 pillage tokens and Lyle had 6 scoring units – each scoring unit I killed made it easier for me. Herja and the King worried me but I felt I could control the 4 hordes. Lyle got very aggressive with his King and it landed in the middle of my line turn 2 and took a rear charge from the Knights, died with the Knights took 5 wounds from the Crystal blowing up. Herja danced around my Ur-Elohi and archers and I was careful not to give her any charges. With the Knights and Elohi out ranging his units I delayed and moved around and due to superior numbers was able to get the win. Attrition was 1195 to 1190

So after 2 wins and a draw I was sitting 4th and satisfied with how things were going – then the draw came out and it was Jeff. I played Jeff once before and got smashed – he is a master at list writing and an even better master of playing. Everything had to go right if I was to escape with a decent result.

Jeff set up majority of his units on his left, a warrior unit in the middle and a Boomer and Beserker unit on his right with a Warlock and a couple of Blasters. I felt I had a pretty good match up with the Elohi, Knights and Footguard against this side and the rest in the middle and screened by terrain in the middle. I know how painful Blasters can be and didn’t realise that Boomers had a breath weapon – reading opponents lists are what I need to get better at. If I could clear that side I could sweep round and attack from front and side – that was the plan. Sadly it was the game the Dice Gods decided to abandon me.

Chris’s list was wizards with 18 Lightning Bolts, 3 War trombones and a another unit with Diadem of Dragon Kind – so 40+ breath attacks and 18 LB’s – rest of list didn’t matter.

I have played Chris a few times before and this list was a variation on similar theme – mass shooting and magic.

I lost big time. Chris is a wonderful person to play but his lists are not.

I have played LoR lists quite a few times as Nick Legrand has played them for quite a while. So I knew what his army did and what to avoid.

Ed set up with volley guns, Engineer and General in the centre, Knight and Honour Guard Horde on the right, everything else on the left. I had the Arquebusiers, Elohi and Knights and archers on my left, nothing in the centre, Beserkers, Militia and Footguard on the right near a building about 12” from the board edge and Ur-Elohi behind that building. Was trying to keep out of the way of the volley guns.

If the dice gods abandoned me in Game 4 they well and truly decided to give Ed similar treatment this game. I danced around the centre with my Ur-Elohi with his Duke trying to disorder him – the volley guns had to keep moving up because I kept well and truly out of range. I was cagey on my left so that Ed could not get the charge – my knights went straight down the board edge and stayed out of charge range and the Elohi stayed outside his charge range so he couldn't turn and face my Knights. He flew his General up and was in combat by T2 but that left him exposed to my Elohi who duly charged and took it out. I was able to shoot the Knights – did six wounds and rolled 10 for the nerve test and they were gone. So in one turn Ed lost a good part of his flank and his honour Guard where looking at an Elohi charge to the front and Knights from the rear.

Turn 3 Ed charged his 2nd Knight unit at my Beserkers on the right and due to spacing couldn’t get to my Footguard with the 2nd unit of Honour Guard ( I had put the Beserkers and Footguard in a position around a building to make sure he could get to the Footguard – he decided to put them into the flank of the Beserkers – did 30+ wounds and promptly rolled 1-1. This left his Knights on 7 wounds to get charged by the Beserkers and Honour Guard flank charged by the Foot Guard. By turn 4 Ed was left with City Militia facing Footguard Horde on no wounds and the Beserker Horde on 30+ wounds but with nothing that could get to them. The Volley guns and engineer were surrounded by the Ur-Elohi, Elohi and Knights.

2 dice rolls (the 10 nerve check and the 1-1 on the Beserkers decided the game. Ed lost everything and I lost not much.

This was a game I was never going to win – the Mawbeast Troops just kept charging up wave after wave – there was just no way I was going to be able to get through them all and recover the tokens.

I got through 15 Mawbeast Troops, 2 spitter hordes, Troll Horde, the characters but lost a lot of stuff doing it and just couldn’t get hold of a 2nd token to win the game as they were off in never never land so far from the units I had left.  Attrition was 1420-1365.

I was disappointed in the end result as in 2 of the 7 games I knew I had no chance of winning and that was something I have never experienced before in KoW. It reminded me of the bad old days of WHFB where list design meant you knew the result of the majority of games before dice were rolled. Hopefully the RC will do something to limit extreme builds next year.

Travelling to Brisbane was a great experience, the players were awesome and Neal did a great job as TO. The prize support was fantastic and every players got a prize.